With the help of AlterCam's virtual web camera, you can choose to broadcast from a variety of popular video sources while webcasting Live! Perfect for distance learning, group presentations or just plain fun; AlterCam's tricks your favorite webcast clients into thinking that its "fake webcam" is the real thing. You can share videos, photos, screenshots and more in real-time and all it takes to set-up is a few quick clicks! Unlike some popular fake webcam software, AlterCam is not banned on many services, so if you have troubles with the alternative fake webcam solutions, give a chance to AlterCam! If it is blocked or not visible in the list of the available cameras, just rename it as described in the bottom of the article! Present multimedia slideshows while you narrate; play pre-made videos while you webcast and more. Folks that don't even own webcams are having fun with AlterCam's fake webcam technology; now instead of displaying a generic user icon, or boring video of yourself trying not to look into the camera... you can share just about any media file that's pre-saved in video format.

You can record the video from your real web camera with AlterCam and then broadcast it live in your virtual web camera even if you are not at home! Think of some great jokes for your friends :)

It's referred to as broadcasting because it happens in real-time. Users can take videos they made months ago, and play them during a conversation with a friend today! Taking advantage of the fake webcam's virtual media stream, users can show and tell using alternative video sources; delivering professional grade presentations.

In some cases, you may need to rename the fake webcam. For example, if AlterCam is not allowed or banned at some service, or AlterCam is not listed as available camera, you can simply rename your fake webcam clicking on "Options" button and switching to "Virtual camera" tab: 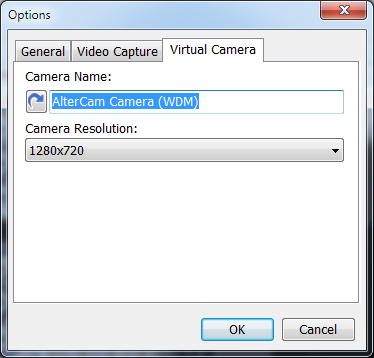 Change the default value of "AlterCam Virtual Camera" to something like "C922 Pro Stream Webcam" to avoid the messages like these:

or in case you just not see your fake webcam in the list!

If you still see the old simulated camera name after renaming, please restart your PC. Another thing to avoid banned cam messages is to try to use a random chat service with another web browser. We advise avoiding using the Chrome browser for random chats like Omegle and Chaturbate. Also, these services can detect the virtual audio device, if you are using it as a microphone. Virtual Audio Device cannot be renamed. You can try to delete it in Device Manager to avoid bans.

AlterCam works with just about every webcast client (Zoom, GoogleMeet, Skype, and more) and adds a layer of "cool" to an otherwise standard (and rather boring) toolset. Along with its fake webcam feature, AlterCam comes with dozens of other options that help you modify and transform your webcasting stream! Add both video and audio effects, customized backgrounds, designer overlays and so much more.